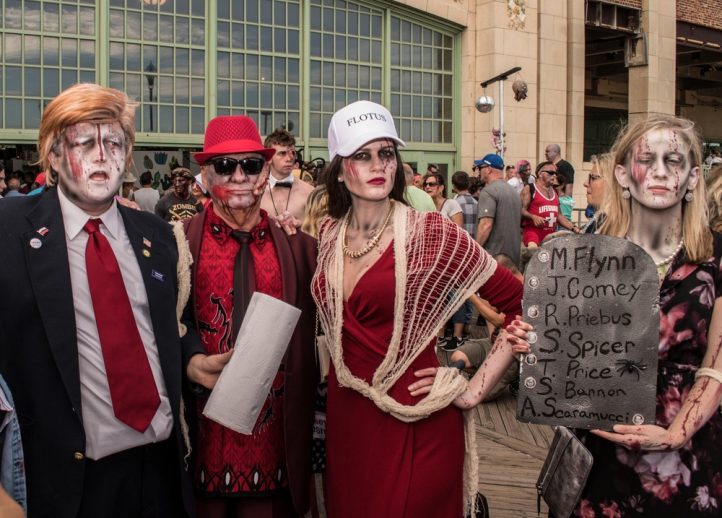 The 2017 film Bushwick begins like a lot of zombie flicks.

An unsuspecting couple is walking through a subway station in the working-class neighborhood of Bushwick in Brooklyn. The station is eerily empty. They hear gunfire outside. The boyfriend goes out to investigate, and you know from the conventions of a zombie film that this is a very bad idea. No need for a spoiler alert: he dies.

The girlfriend ventures out to find the residents of Bushwick fighting an invading horde.

But it’s not a horde of zombies, even though they are committed to the same relentless violence. The invasion force turns out to be a right-wing paramilitary bent on securing the secession of Texas and most of the South from the United States.

Why are they in Brooklyn? That’s not entirely clear. The grunts, all dressed in identical black riot gear, are just following orders. They didn’t expect resistance, but the diverse community has banded together, African-Americans and Orthodox Jews and bearded craft beer connoisseurs. So, like zombies, the militia members are killing every resident they encounter.

Militia violence. Rejection of the federal government. Right-wing crazies promoting a civil war. Bushwick was made at a time when Hillary Clinton looked like she’d be the next president and right-wing resistance inevitable.

Instead, the Electoral College tilted toward Donald Trump. As the new head of the federal government, Trump preempted the worst-case scenario. His more extreme followers wouldn’t weaponize their grievances as long as one of their own was “running” the country.

At the same time, Trump implicitly promised to maintain this tenuous status quo as long as he won reelection. In the first presidential debate, Trump told the Proud Boys, a neo-fascist group, to “stand back and stand by.” The extremists waited, locked and loaded.

A landslide — against Trump and against his Republican Party enablers — might have put this worst-case scenario to rest. Instead, with Trump refusing to concede the election and the Republican Party celebrating its congressional and state house victories, the country is now inching ever closer to the Bushwick plotline.

Accelerationists like the Boogaloo Bois, who want to bring down the existing system through a violent race war, are chomping at the bit. A raging pandemic has separated Americans into the cautiously masked and the defiantly maskless, further undermining what remains of the country’s cohesion.

As for zombies, they have rampaged across American popular culture at least since Night of the Living Dead hit movie theaters in 1968. They have now lurched off the page and out of the multiplex into real life. For how else would you describe the millions of Americans who deny the effects of a disease that has killed nearly 250,000 people and the results of a free-and-fair election that repudiated Donald Trump?

Jeez, something must have eaten their brains.

In 2016, the virtual equivalent of zombies — bots operating through social media and the comment sections of websites — intervened in the presidential election. In 2020, those bots were less influential. But who needs virtual zombies when Americans themselves have become so willing to spread disinformation?

The Russian intention back in 2016 wasn’t so much to get Trump elected. No one, including Trump himself, thought there was much chance of that. Rather, the disinformation campaign sowed doubt about the political system more generally.

What started out as marginal hobbyhorses became widespread delusions. Don’t trust the candidates, the media, the NGOs. A conspiracy lurks behind the façade of normalcy. The Democrats are actually pedophiles (the Pizzagate conspiracy), the financiers are actually Nazis (the Soros conspiracy), and government officials are part of a deep-state resistance to Trump’s agenda (the Fauci conspiracy, among others).

And then there’s the One Conspiracy that Rules Them All.

The QAnon notion that all the world’s a Satanic child-trafficking ring — Pizzagate raised to the nth degree — is so absurd on the face of it that no reasonable person could possibly entertain it. But plenty of people have embraced equally wacky theories. L. Ron Hubbard’s Dianetics has been a bestseller for decades, and all too many Americans were willing to believe that Barack Obama was a foreign-born Muslim despite mountains of evidence to the contrary.

Of course, it’s a lot easier to deny the existence of something if it remains far away in time or space. Those who live far from the ocean can blithely refute the evidence of the rising waters. That’s not so easy when those waters have reclaimed your land and your house tumbles into the sea.

Misinformation about COVID-19 — that masks are not necessary, vaccines should be avoided, or herd immunity is a viable strategy — has been lethal. That denialism should have disappeared as COVID-19 infection rates began to spread to every corner of the United States before the election. The increasing proximity of the threat should have motivated Americans to come together as one to fight the virus.

At the very least, fear should have kept people at home instead of venturing out to the potential super-spreader events that President Trump was sponsoring as campaign rallies before the election.

But no. Thousands still showed up to what Democrats should have called Trump’s “death rallies.” Even more unbelievably, Trump went on to defeat Biden in those parts of the country hardest hit by the virus. According to the Associated Press, “in 376 counties with the highest number of new cases per capita, the overwhelming majority — 93 percent of those counties — went for Trump, a rate above other less severely hit areas.” Even in hard-hit areas that ultimately voted for Biden, Trump often improved his showing from 2016, NPR reports.

Well, zombies don’t know that they’re zombies. One day they’re ordering BLTs and the next they’re eating their next-door neighbor. They’re completely unaware of how the abnormal has become normal.

A coup requires at least some public support. The Thai military could count on the Yellow Shirts. The Egyptian military relied on those fearful of the religious leanings of the Muslim Brotherhood. Pinochet courted the rich and middle class.

Where public support is lacking, coups often wither. That’s what happened in the Soviet Union in 1991. This week in Peru, the would-be president who forced the resignation of anti-corruption campaigner Martín Vizcarra stepped down after only a week in office, as protests continued to roil the country and the police killed two demonstrators.

Trump has the backing of millions of Americans who have bought into his allegations of a “stolen” election. As importantly, only a minority of Republican Party grandees has bowed to the inevitable by acknowledging Biden’s victory. That includes a mere four Republican Senators (Lisa Murkowski, Ben Sasse, Mitt Romney, and Susan Collins).

A number of Republican candidates in this month’s election, including those who were beaten by large margins, are also refusing to concede. Errol Webber, who lost his bid to unseat Karen Bass in a California congressional seat by an astounding 72 percent, now claims election fraud and won’t back down. He’s not alone in his delusions.

The question is: how far will Trump and the Republican leadership go?

It’s not likely that the Pentagon would support a coup, even after the removal of Mark Esper. The militia movement is armed and dangerous, but it’s not even close to being as organized as in the Bushwick scenario. The “Million MAGA March” fell short of its goal by 980,000 people or so.

Trump just doesn’t have the numbers — not the votes to reverse the election results in a recount, not the judges to overturn the decision through a legal strategy, not the support in state legislatures to replace the Electoral College delegates, and not the people on the street for a popular uprising.

That doesn’t mean he can’t still do damage. Just this week, he announced that the administration would sell new leases to oil and gas companies to drill in the Arctic National Wildlife Refuge in Alaska. He fired the Homeland Security official who declared the election secure, and narrowly failed to install wacko Judy Shelton on the Federal Reserve board. And he came close to starting a war with Iran just to destroy any last chance of salvaging the Obama-era nuclear deal. His advisors reportedly persuaded him that it would be unwise to bomb the country’s nuclear facilities.

Meanwhile, as I explain in a new article at TomDispatch, not only is Trump throwing sand in the wheels of transition, the Republicans are gearing up to block just about everything the Biden administration will try to do from January on. The Republicans have transformed themselves into a zombie party that relies on a narrow base of zombie support. The party effectively died as a viable political force — absent gerrymandering and voter suppression — before Trump brought it back from the dead.

In films, zombification is a one-way street. Once you start twitching and slavering, there’s no going back. Let’s hope that the analogy doesn’t hold in American politics.

In 1956, three years after Stalin’s death, Nikita Khrushchev gave a secret speech to the Twentieth Party Congress entitled “On the Cult of Personality and Its Consequences.” Today, the speech seems rather boring, full of jargon and acrobatic attempts to separate Stalin’s crimes from the Soviet system. But at the time, it shocked the Communist Party zombies who’d hitherto been unaware (or pretended not to know) of Stalin’s crimes.

Most of those who were well acquainted with Stalin’s crimes were already dead of famine, war, or murderous purges. That’s the thing about plagues: by the time you’re finally convinced of their lethality, you’re on your deathbed. For some, even death is not enough. Compare the Stalinists who proclaimed love for their leader as they were being executed with the COVID-19 patients who continued to deny the disease with their dying breaths.

The Party speech was the first major step in the de-Stalinization campaign that Khrushchev waged into the 1960s. The campaign produced some liberalization of Soviet society, but the Thaw came to an end in a Brezhnev backlash that lasted effectively until Mikhail Gorbachev came to power in 1985 (and finally published Khrushchev’s 1956 speech for all to read).

Unfortunately, the de-Stalinization that Khrushchev started in 1956 didn’t completely discredit the Soviet dictator. Indeed, according to recent polls, an astounding 70 percent of Russians approve of Stalin’s role in Soviet history.

Trump’s personality cult exerts a similar effect. His adherents are incapable of seeing that the man’s evil extends far beyond his intemperate tweets. No speech by Joe Biden is going to make any difference. Not even denunciations by former Trumpers — Michael Cohen, John Bolton, John Kelly — have done much of anything. Trump’s support only grew from 2016 to 2020.

So, what will it take to avoid the Stalin scenario? In an article about three historical parallels —  Reconstruction, de-Nazification, and de-Baathification — I conclude that a mere speech won’t do the trick.

Because Trumpism is a cancer on the body politic, the treatment will require radical interventions, including the transformation of the Republican Party, a purge of Trumpists from government, and the indictment of the president and his top cronies as a criminal enterprise. To avoid a second Civil War, however, a second American Revolution would need to address the root causes of Trumpism, especially political corruption, deep-seated racism, and extreme economic inequality.

In this way, the leader can be properly stigmatized while the followers can be progressively de-zombified.

One thing is for certain: If the Biden administration doesn’t take firm and decisive action against the illegalities of the Trump team, if Biden doesn’t address the root causes of the zombification of half the electorate, the new president will be eaten alive.

John Feffer is the director of Foreign Policy In Focus and the author of the just-released book, The Pandemic Pivot.