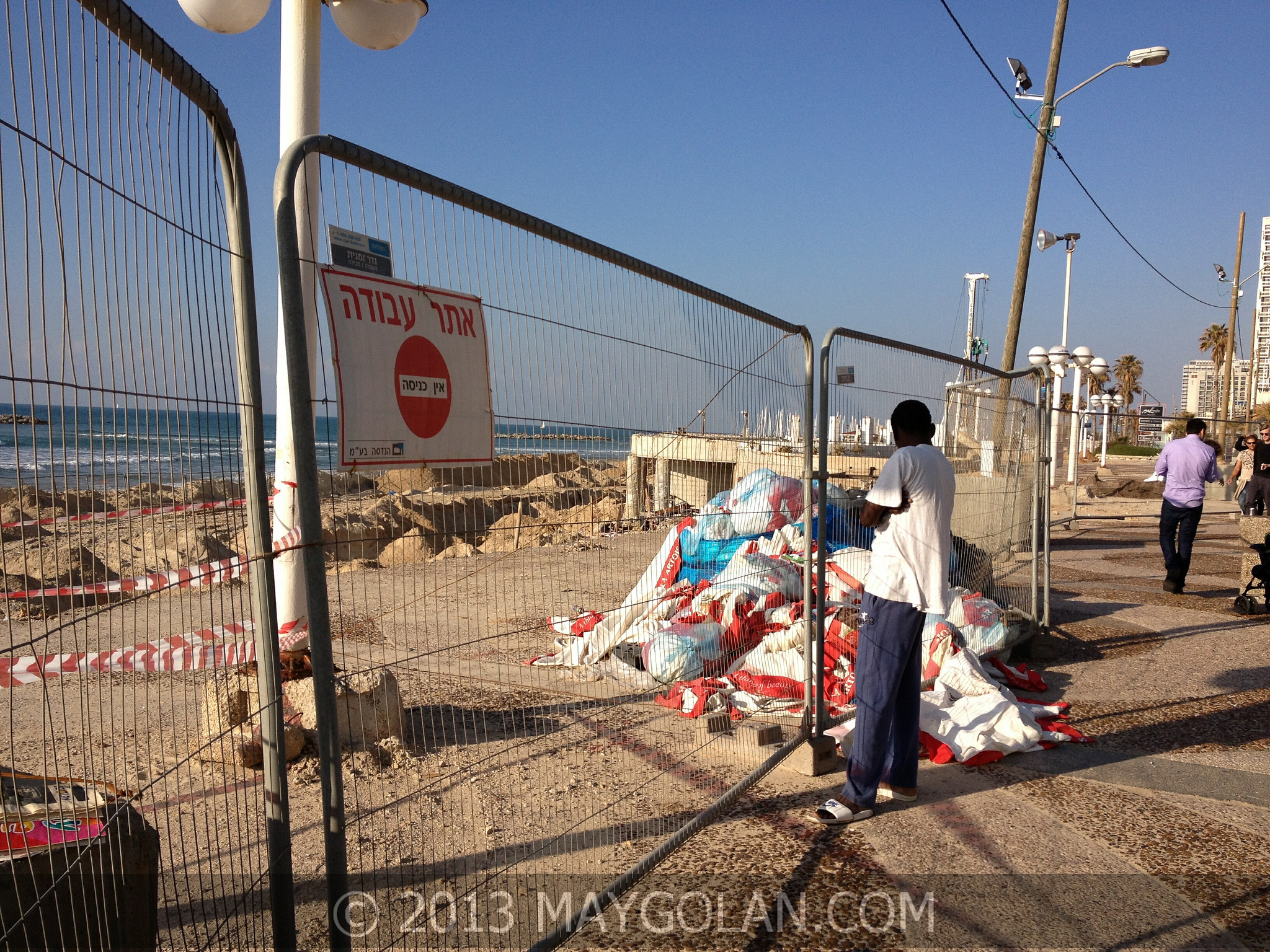 An Eritrean in Israel

Over 35,000 Eritrean refugees live in Israel today. Dubbed a "cancer" by right-wing politicians, just four have been granted asylum.
By Dan Connell | February 19, 2015

Kifle was in the fourth grade at Bet Soira — the “Revolution School” run by the Eritrean People’s Liberation Front at their rear base in Harareb — when the final battle of the 30-year struggle for independence from Ethiopia was fought in 1991 outside Asmara.

His father, a fighter, had been killed in the war, and his mother and a younger brother were based elsewhere then. But Kifle was not alone. His family was the liberation front.

Today, Kifle languishes in a minimum-security prison, euphemistically termed a “detention center,” in Israel’s sweltering Negev Desert, unsure where his life is headed. His brother is a refugee in South Africa. His mother remains in Eritrea. Like most Eritrean refugees I’ve interviewed on four continents over the past six months, he asked that his real name be withheld to protect relatives from retribution at home and himself from repercussions in Israel.

Whether he or the others are right to be afraid at this point — many tell stories of family members punished in Eritrea after their flight — fear and uncertainty are their constant companions. Their experience teaches them this.

Kifle spent the decade after Eritrea’s liberation in Asmara, the Eritrean capital, and graduated from high school in 2000. He was called up for military service that May during the last round of fighting in a two-year border war with Ethiopia and given a shortened training course at Gahtelay. But combat ended before he was deployed, and he was sent to the Sawa military training center for two months of instruction as a military policeman.

Over the next four years, he was assigned to posts in Decamare, Barentu, and Tserona under a National Service program initially requiring all young people to serve 18 months but indefinitely extended since the conflict with Ethiopia. This has left tens of thousands to work at bare subsistence pay for a decade or longer as soldiers, low-level administrators, teachers, agricultural laborers, or in other government jobs.

For his part, Kifle kept hoping to be released so he could return to school. In 2005 he was assigned to Mai Nefi, the Eritrean Institute of Technology, but his former police commander intervened and ordered him to return to his post in Barentu.

For Kifle, this was a dead end from which he might never emerge. Faced with this, he fled to Asmara and went into hiding. A year later he was caught and sent to Mai Nefi again, this time as a prisoner under military guard, and put in a small room with 20 others for six months. It was not a known prison, just an empty room with no windows and a door with a lock.

Nearly every government facility or military camp in Eritrea has such holding tanks. Former detainees call them “prisons.” But they are not jails in any formal sense, just over-sized closets where offenders are held for interrogation or just kept out of sight. They do not appear on any prison lists published by human rights organizations, which often leads to problems later with asylum claims.

If anything, they’re worse than prisons, as they were not constructed to hold detainees, the guards are not trained to deal with them, and there are no services or structures (or even furniture) to accommodate them.

After half a year, Kifle was taken out one night with no warning and put in the back of a large truck to be transferred to one of Eritrea’s official prisons. At a traffic light in Asmara, several of the prisoners jumped out, and the guards went after them. Taking advantage of the confusion, Kifle leapt out too — and escaped.

Two months later, he bought a forged travel permit for 2,000 nakfa (about $150 at official rates) and made his way to the southern town of Tserona, where he had previously served. He arrived at 4 a.m., waited two hours for daybreak, and then joined a parade of farmers on their way to the weekly outdoor market. He knew the area and chose the day carefully. He also dressed as a peasant and carried an axe to avoid notice. When he got close to the border, he hid in a thicket. At midnight, in a driving rain, he crossed the border into Ethiopia.

“Always I think about what the government is doing, after growing up in the field with such a different idea of the future,” he remarked, referring to the liberated zones of Eritrea during the independence war. We sat on dusty wooden benches in January with only a lattice roof for cover from the blistering desert sun, a few meters from the detention facility he now calls home.

Kifle spent three months at the Shimelba Refugee Camp in northwestern Ethiopia before moving on to Sudan. “I wanted to continue my education,” he said, “and there were no prospects there.” He paid smugglers about $120 for the trip, which ended at another refugee camp — Kilo 26, near Kassala — after he secured a UN identity card.

“I thought this would be a free country with work and opportunities for education, but it was not so,” he said, reflecting both his aspirations and the lack of awareness he shared with many refugees of what awaits them at their destinations. Feeling trapped at the camp, he tried to get to Khartoum, the Sudanese capital, but he was caught and sent back. Undaunted, he tried again and made it the second time. Nine months later he was organizing his next move.

In September 2008, he paid smugglers $1,100 to get to Israel via the Sinai. The Bedouin traffickers held him for a month in an effort to squeeze him for another $500, which he raised by contacting friends in Sudan and Egypt, and then released him to cross into Israel not far from where he is detained today.

A Fresh Start in Israel

His timing was good: The ruthless kidnap-torture-and-ransom operation that would victimize thousands of Eritrean refugees in the Sinai by the end of the decade was not yet up and running, and the Israelis were not then blocking access to asylum seekers. Soldiers greeted him when he reached the other side, and within days he was in Tel Aviv ready for a fresh start.

Again he was disappointed. He spent a year trying to find work, traveling from Tel Aviv to Netanya and several other cities, taking day jobs in construction or cleaning, but he could not get a work permit so he had to accept underpaid, off-the-books employment wherever he could find it.

Eventually he landed in Jerusalem, where he spent three years — two of them working as a cleaner at a college after a friend left for Norway and passed on his position. But this, too, was below minimum wage and without benefits, so he barely got by, though he learned Hebrew and did his best to fly below the radar. But it got worse.

When he went to renew his two-month “conditional release” permit, which the Israeli government issues to those it terms “infiltrators” — essentially all those who cross from Sinai — Kifle was summoned to Holot under a new policy, still contested in the Israeli courts, that requires unmarried Eritreans who arrived prior to May 2009 to present themselves for detention once they receive a summons. (This was also applied to thousands of Sudanese refugees and migrants, most of whom have either been deported or opted to leave.)

Holot was constructed in 2013 as a sort of halfway house, neither a classic prison nor a refugee camp — a barren holding center where hope is crushed and detainees give up their quest for political asylum and just leave the country.

Israeli authorities encourage them to self-deport, either to Eritrea or a third country that will accept them. Only Rwanda and Uganda have done so under unofficial arrangements in which deportees are given short-term Israeli travel documents that are confiscated upon arrival, leaving them in a new country with no papers. Israel initially sweetened the deal by offering cash payments of $3,500, since lowered, to get them to accept.

For those who stay, Holot’s gates are open by day, and detainees are permitted to go outside to the parking area where some enterprising residents operate makeshift grills and blare music from boom boxes. But there are no services or activities within the barbed wire fences apart from meals and sleeping quarters. There’s nothing to do for the refugees but contemplate their plight.

At first the detainees were required to check in three times per day and at night, but the courts put these regulations in limbo. So the rule now is only once a day, allowing some to hop on buses that stop at the front gate for day trips to Be’er Sheva or even Tel Aviv to run errands or pursue asylum claims. If they don’t come back and are caught, as nearly all who go AWOL are, they’re sent across the road to a cell in the Saharonim Prison. Kifle knows the place well, as he was sent there for two months last summer when he and other refugees led a protest against their conditions.

Under the law used to justify the round-up — actually an amendment to a 1954 Prevention of Infiltration Law aimed at Palestinians — the asylum seekers can be held for 20 months. It’s not clear what happens next or if human rights activists can win a legal effort to void this amendment, as they have others. But each time such laws have been challenged in the past, they’ve simply been rewritten and applied anew.

Israeli advocates who support the refugees are not optimistic. Neither is Kifle.

There are over 35,000 Eritreans in Israel, most of them seeking refugee status. But only four have been granted asylum since the new policy went into effect a year ago. Few have arrived since 2012, when a heavily fortified fence was put up that runs from the Mediterranean to the Red Sea — only 43 in 2013 and 21 by the end of the third quarter of 2014.

Efforts to cleanse Israel of what one member of Prime Mister Benjamin Netanyahu’s Likud Party bloc called a “cancer to our body” appear to be accelerating. Most refugees expect Israel to move the benchmark date for detention closer to the present as detainees depart until the majority is gone.

Kifle said he had thought he registered as an asylum seeker when he crossed the border seven years ago, but the government now insists he is a migrant worker. He filed a petition for Refugee Status Determination early in 2014, but he has yet to get a response.

“I always respected the law,” he said. “Now I am just waiting for the next thing to happen.”

Dan Connell is a visiting scholar at the Boston University African Studies Center and a contributor to Foreign Policy In Focus who has been writing about Eritrea for nearly 40 years. This is the third in a series on the journeys of Eritrean refugees.