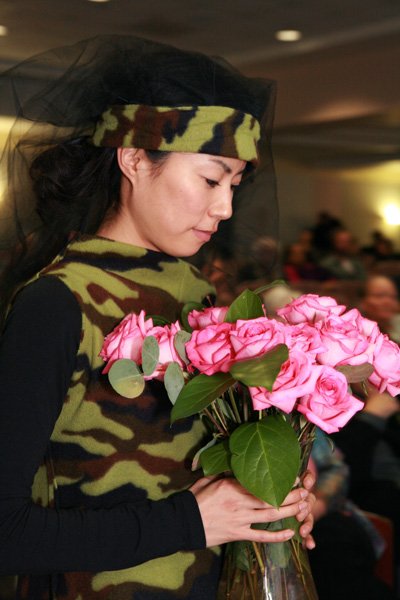 In the silver lining to the devastating economic crisis, critiques of excessive military spending are now beginning to echo around Capitol Hill and throughout mainstream media. Federal budget priorities — and the billions of dollars tied up in the military budget — are coming under much wider scrutiny. For years, the National Priorities Project, WAND (Women’s Action for New Directions), and War Resisters League have calculated the tradeoffs for military spending with readable pie charts, diagrams, and interactive websites to educate and empower ordinary people to take part in this policy debate.

Yet what all the facts and figures cannot quite crack is the deeply entrenched military mindset that so dominates American society and culture.

That’s why in May 2005 we worked with the Women of Color Resource Center in Oakland, California to stage a popular education project, “Fashion Resistance to Militarism.” Professional designers and home dressmakers created eye-catching outfits to deconstruct military policies. We wrote scripts for each runway that were read by a narrator as the models strutted their stuff. An enthusiastic crowd of 450 people convinced us that this unlikely genre is a highly effective way to discuss the militarization of culture in accessible terms and to get the audience thinking about heavy topics like the military budget or sexualized military violence.

For all the talk of change, militarism hasn’t gone away in the new administration. Despite campaign promises to sit down and talk with U.S. “enemies” and his recent announcement to withdraw U.S. combat troops from Iraq by 2011, President Barack Obama is deploying 30,000 more U.S. troops to Afghanistan and has announced increases in military spending as well as increases in the overall number of U.S. soldiers and Marines.

To expose the subtle ways that militarism creeps into our national budgets, foreign policies, interpersonal relationships, and fashion, we produced another anti-military fashion show for the “Security Without Empire” conference in Washington, DC on February 28, 2009. Here are a few of the outfits we showcased, as described in the scripts we narrated. 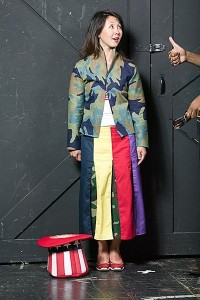 Christine Ahn designed a two-piece called the “Militarized National Budget.” The chic camouflage jacket represents the half of the discretionary federal budget devoted to war, and the skirt shows the other half of the budget allocated to civilian needs. Patterned after a pie chart, the colors on the skirt are blue for health, yellow for energy, red for transportation, and purple for international affairs. Tucked between the pleats of the skirt is more camouflage, representing more military spending: the Veterans Administration sneaks into the health budget, Homeland Security creeps into transportation, NASA and nuclear weapons research is buried in energy, and international affairs money trains foreign troops.

But that’s not the full story. As modeled by Ellen-Rae Cachola (of Women for Genuine Security), underneath the military budget is a tank top featuring a corporate logo flag to show how billions of “defense” dollars go to Pentagon contractors, like Lockheed Martin, Boeing, and Northrop Grumman.

And there’s more. Hidden underneath the Uncle Sam hat is a long white ribbon representing the $700 billion-plus supplemental spending bill for the wars in Iraq and Afghanistan. Since the United States doesn’t have the money to finance these exorbitant expenditures, other nations — notably China but also Japan, Saudi Arabia, and Singapore — are bankrolling these wars. Ellen wears a China cap stuffed under patriotic Uncle Sam to represent the foreign lenders.

Next time, this outfit will need some alteration, as Obama announced to a recent joint session of Congress that he’ll include these wars in the military budget: “For seven years, we have been a nation at war. No longer will we hide its price.”

The pants, shirt, and vest have deep pockets, inside pockets, and pockets within pockets. A roomy padded Social Security pouch is zipped up tight and padlocked. Sandra throws out a stack of dollar-bill leaflets showing that there’s plenty of money — for education, for health care for everyone, money for drug treatment, AIDs research, renewable energy, good public transit, affordable homes, parks and gardens, filling in potholes, cleaning up trash, mending everything that’s broken, and bringing good food to poor neighborhoods. There’s money for community centers, cafes, and libraries, care for elders, children, and everyone who needs it. There’s money for poets and poetry, for translators so we can really communicate, for music, theater, dance, painting, and everything you can imagine that we need to live in peace and with justice.

War Is Not Sexy 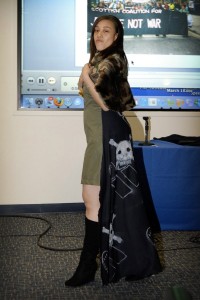 Modeled by Genevie Gold (AFSC, Cambridge) and designed by young people active in an AFSC counter-recruitment program in Portland, Oregon, this short, strapless, body-hugging dress symbolizes the recruiters’ subliminal message that war is sexy. The understated forest green stretch cotton mirrors the Army’s dress uniform. A row of jewels replicate medals awarded for honor and valor, an alluring promise of possibility for a young woman with brains but few options. Topping off this outfit is a short protective cape of camo-fur fabric and heavy gold bracelets — gold bling — with the promise of money for college, training for the future, and a large signing bonus. What the recruiter hasn’t told Genevie is that the bracelets are really golden handcuffs. Once she enlists she’s military property.

As the model turns and removes her cape, we see the calf-length black train cascading down her back, decorated with skulls, and showing the dark shadow of death and destruction that follow in militarism’s wake. This shadow may haunt her long after she leaves the service, perhaps suffering from military injuries, PTSD, or the trauma of sexual violence at the hands of her former military colleagues.

The youth who designed this ensemble and Sandra Schwartz who drafted the script make well the point that while recruiters make seductive promises, death isn’t a fashion statement.

We also designed outfits to show how militarism and gender intersect, using a few examples from WWII up to the present. For the Washington, DC runway, we showcased five outfits: “Rosie the Riveter,” “Bikini,” “Military Bride,” “Patriotic Woman,” and “Power Suit.” 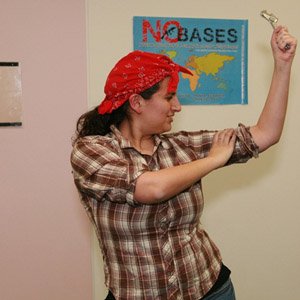 Sarah Block (American University) wore Rosie the Riveter’s trademark denim work pants, plaid shirt with rolled-up sleeves, red bandana, and can-do attitude. She represented women who worked in factories, shipyards, and airplane construction during World War II when men went off to war. Rose Will Monroe, the inspiration for the iconic Rosie worked as a riveter building B-24 and B-29 bombers. She starred in a promotional film and a poster campaign used to encourage middle-class women to join the workforce to support the war effort. Over 6 million women did so, increasing the number of women in paid work by 57% from 1940-1944. After the war, however, many women lost these jobs, which were given to returning servicemen.

Another way women support war and preparations for war is by singing, dancing, and entertaining crowds of homesick men. These women are considered essential to morale, and a 2-piece bathing suit is a staple for any girl entertaining the troops. Even skimpier outfits are worn by women who work in bars and clubs surrounding U.S. bases, set up by the United States and “host” governments for U.S. troops. Shinako Oyakawa from Okinawa modeled a classic red, white, and blue bikini top made by none other than Old Navy, and paired with a short, short skirt. This outfit also has militarized origins. A Paris fashion designer chose the name “bikini” after the U.S. conducted atomic testing in 1946 on Bikini Atoll in the South Pacific because this name dominated world headlines when his atom-sized bathing suit debuted on the runway. 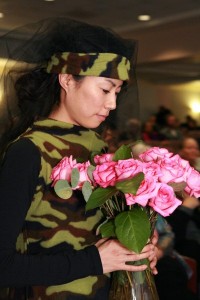 Hikaru Kasahara (People’s Plan Study Group, Tokyo) modeled the “War Bride” outfit: a somber wedding dress of camouflage fleece with black knee-boots and a dramatic black veil, suggesting the fate of many women who marry U.S. soldiers. Since World War II, with the deployment of U.S. troops in Asia, over 200,000 Japanese, Vietnamese, Thai, Korean, and Filipina women have married U.S. servicemen. Many women were alienated both by white U.S. society and their ethnic immigrant communities who looked down on them for marrying foreign soldiers. These war marriages were often abusive and many ended up in divorce. In general, abuse in military families is higher than in civilian ones, and studies show that military servicemen use weapons against their wives twice as often as civilian batterers.

Natalie Wilson (California State University, San Marcos) showed how the military also relies on women’s patriotism. In past decades, “Patriotic Woman” wore pumps and a tailored dress, and was an enthusiastic flag-waver. Our model wore a contemporary version of this runway staple, a $25 dollar “I Love My Marine” tee-shirt that shows her pride, faith, and spirit for her fighting guy, and perhaps her support for the military policies that deploy him to a war zone. She’s working the “home front,” juggling home and work like any mother, keeping her family going while Dad’s away. She’s there for him, too, when he calls in the middle of the night from some payphone on a base near Baghdad. No wonder she looks frazzled. Her kids may be older, targeted by recruiters. The ads appeal to her and credit her mothering: “You made them strong — We make them Army strong.” The military wants us to believe that “every girl loves a guy in uniform.” It militarizes our love for our sweethearts, husbands, sons — and now our military daughters too. 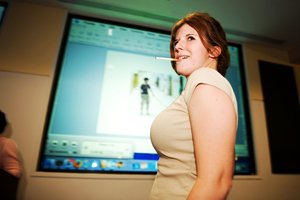 Lindsey Kerr (USAPAN, a group challenging human rights violations in the Philippines) wore what we called the ultimate Power Suit, a deceptively simple cotton army drab tee-shirt and pants ensemble, with combat boots, dog leash, cigarette, smirk, and “thumbs up” gesture. She represented Lynndie England, a guard at Abu Ghraib military prison near Baghdad, and symbol of a terrible new twist on sexualized military violence, usually perpetrated by men against women. Lynndie’s gender was deployed in the sexualized humiliation and oppression of male prisoners — a kinder, gentler torturer? Her race and nation placed her in the dominator role, with Arab men in the victimized “female” role. Lynndie England was one of the few lower-ranking individuals apprehended and tried for what the world denounced as war crimes, which are forbidden under the Geneva Conventions but condoned and ordered by higher-ups in the U.S. military chain of command.

From Khaki to Action

According to Cynthia Enloe, even khaki has military origins. The term “khaki” is an Urdu word describing the greenish, sandy, dusty color of the hillsides in Afghanistan and northwest India. When the British imperial military attempted to defeat local forces in the late 1800s, they lost resoundingly. One reason was because British soldiers stood out in their bright blue and red wool uniforms against the stark dusty hillsides. So they adopted a uniform and a shade that would blend into the surrounding landscape and called it by the local people’s name: “khaki.” So all those khaki slacks worn in banks and law offices on casual Fridays derive from an imperial war-waging strategy.

As the antiwar movement figures out how to break the militarized mentality that is more pervasive than any war, “Fashion Resistance to Militarism” might be just the popular antidote to help break down the system of policies, institutions, operations, and values that make up the military-economic-corporate-congressional-media-academic complex. The militarization of everyday life is in the air we breathe and the ideas we accept. Military uniforms not only help to turn men and women into soldiers, they also tell us something about the militarization of popular culture. We allow our toddlers to play with action figures like GI Joe and watch our teenagers shoot ’em up in video games. And then we passively accept our policymakers spending $536 billion dollars on “defense.” It is high time that we assess and confront how militarized the United States and our modern world have become.

Christine Ahn works with the Global Fund for Women (www.globalfundforwomen.org) and is a senior analyst with Foreign Policy In Focus, and Gwyn Kirk is a member of Women for Genuine Security.