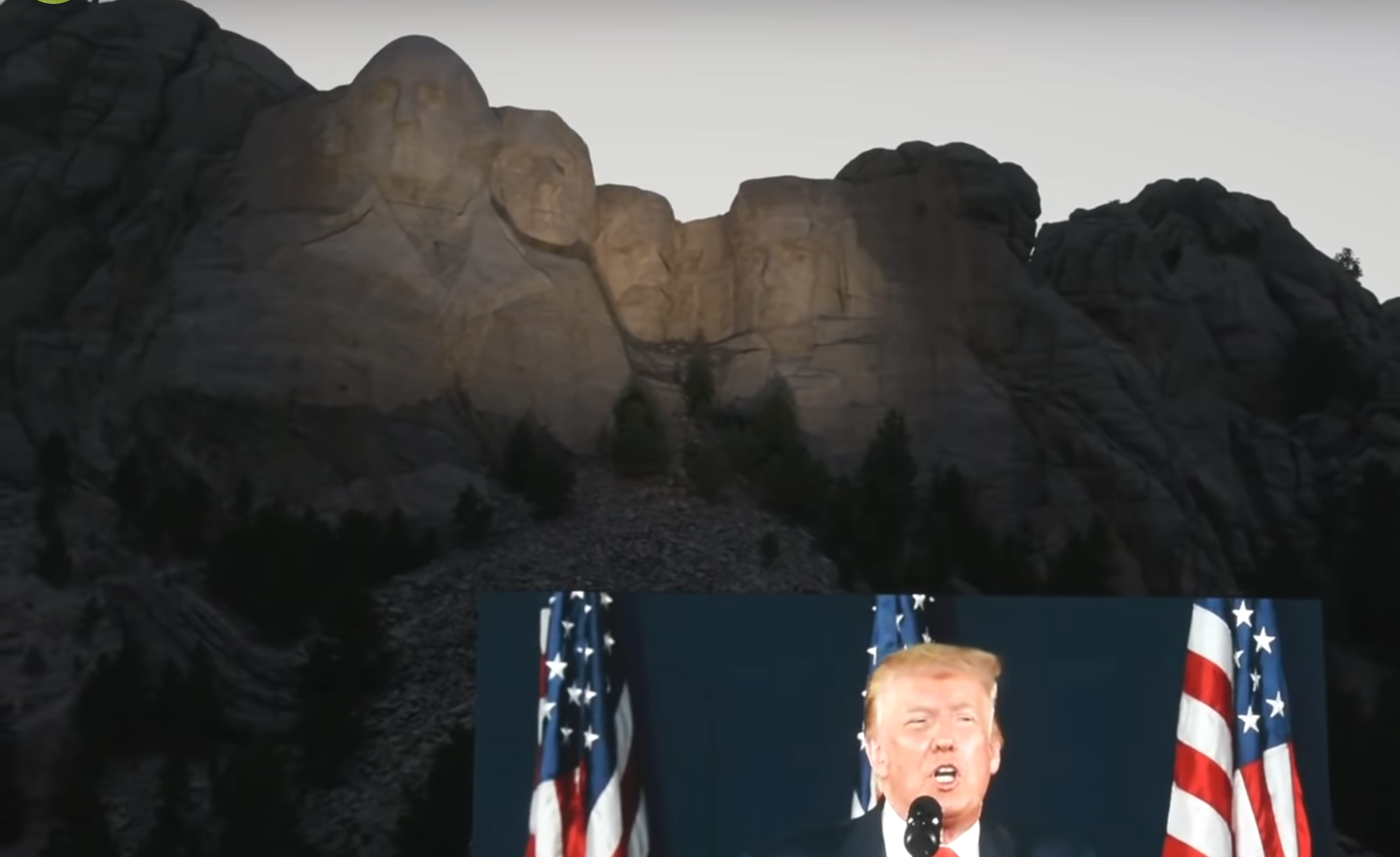 The Global Rushmore of Autocrats

It’s not Washington and Lincoln Trump imagines himself in the footsteps of — it’s Xi and Putin.
By John Feffer | July 8, 2020

Donald Trump would dearly like to add his face to Mt. Rushmore as the fifth presidential musketeer. His fireworks-and-fury extravaganza on July 3 was the next best thing. Trump’s dystopian speech was almost beside the point. Much more important was the photo op of his smirking face next to Abraham Lincoln’s.

More fitting, however, would be to carve Trump’s face into a different Rushmore altogether. This one would be located in a more appropriate badlands, like Mt. Hermon in Syria near the border with Israel. There, Donald Trump’s visage would join those of his fellow autocrats, Vladimir Putin and Xi Jinping. To honor the illiberal locals, the stony countenances of Bashar al-Assad and Benjamin Netanyahu would make it a cozy quintet.

Let’s be frank: Jefferson and Washington are not the company that Trump keeps, despite his America First pretensions. His ideological compatriots are to be found in other countries: Jair Bolsonaro of Brazil, Narendra Modi of India, Rodrigo Duterte of the Philippines, Daniel Ortega of Nicaragua, Viktor Orban of Hungary, and so on. Alas, this global Rushmore of autocrats is becoming as crowded as a football team pressed together for a selfie.

But Putin and Xi stand out from the rest. They get pride of place because of their long records of authoritarian policies and the sheer brazenness of their recent power grabs. By comparison, Trump is the arrogant newcomer who may well not last the season, an impulsive sprinter in the marathon of geopolitics. If things go badly for Team Trump in November, America will suddenly be busy air-brushing 45 out of history and gratefully chiseling his face out of the global Rushmore.

Putin and Xi, however, are in it for the long haul.

At the end of June, Russia held a referendum on a raft of constitutional changes that President Vladimir Putin proposed earlier in the year. In front of Russian voters were over 200 proposed amendments. No wonder the authorities gave Russians a full week to vote. They should have provided mandatory seminars on constitutional law as well.

Of course, the Russian government wasn’t looking to stimulate a wide-ranging discussion of governance. The Russian parliament had already approved the changes. Putin simply wanted Russian voters to rubber-stamp his nationalist-conservative remaking of his country.

At the same time, a poor turnout would not have been a good look. To guarantee what the Kremlin’s spokesman described as a “triumphant referendum on confidence” in Putin, workplaces pressured their employees to vote, and the government distributed lottery prizes. Some people managed to vote more than once. On top of that, widespread fraud was necessary to achieve the preordained positive outcome.

Instead of voting on each of the amendments, Russians had to approve or disapprove the whole package. Among the constitutional changes were declarations that marriage is only between a man and a woman, that Russians believe in God, and that the Russian constitution takes precedence over international law.

Several measures increased executive power over the ministries and the judiciary. A few sops were thrown to Putin’s core constituencies, like pensioners.

Who was going to vote against God or retirees?

But the jewel in the crown was the amendment that allows Putin to run for the presidency two more times. Given his systematic suppression of the opposition, up to and including assassination, Putin will likely be in office until he’s 84 years old. That gives him plenty of time to, depending on your perspective, make Russia great again or make Russia into Putin, Inc.

The Russian president does not dream of world domination. He has regional ambitions at best. Yet these ambitions have brought Russia into conflict with the United States over Ukraine, Syria, even outer space. And then there’s the perennial friction over Afghanistan.

Much has been made in the U.S. press about Putin offering the Taliban bounties for U.S. and coalition soldiers. It’s ugly stuff, but no uglier than what the United States was doing back in the 1980s.

Did you think that all the U.S. money going to the mujahideen was to cultivate opium poppies, run madrasas, and plan someday to bite the hand that fed them? The U.S. government was giving the Afghan “freedom fighters” guns and funds to kill Soviet soldiers, nearly 15,000 of whom died over the course of the war. The Russians have been far less effective. At most, the Taliban have killed 18 U.S. soldiers since the beginning of 2019, with perhaps a couple tied to the bounty program.

Still, it is expected that a U.S. president would protest such a direct targeting of U.S. soldiers even if he has no intention to retaliate. Instead, Donald Trump has claimed that Putin’s bounty program is a hoax. “The Russia Bounty story is just another made up by Fake News tale that is told only to damage me and the Republican Party,” Trump tweeted.

Knowing how sensitive the U.S. president and the U.S. public is to the death of U.S. soldiers overseas, Putin couldn’t resist raising the stakes in Afghanistan and making U.S. withdrawal that much more certain. Taking the United States out of the equation — reducing the transatlantic alliance, edging U.S. troops out of the Middle East, applauding Washington’s exit from various international organizations — provides Russia with greater maneuvering room to consolidate power in the Eurasian space.

Trump has dismissed pretty much every unsavory Kremlin act as a hoax, from U.S. election interference to assassinations of critics overseas. Trump cares little about Ukraine, has been lukewarm if not hostile toward U.S. sanctions against Moscow, and has consistently attempted to bring Russia back into the G8. Yet he has also undermined the most important mechanism of engagement with Russia, namely arms control treaties.

Trump’s servile approach to Putin and disengaged approach to Russia is the exact opposite of the kind of principled engagement policy that Washington should be constructing. The United States should be identifying common interests with Russia over nuclear weapons, climate, regional ceasefires, reviving the Iran nuclear deal — and at the same time criticizing Russian conduct that violates international norms.

Xi Jinping has already made himself leader for life, and he didn’t need to go to the pretense of a referendum on constitutional changes. In 2018, the National People’s Congress simply removed the two-term limit on the presidency and boom: Xi can be on top ‘til he drops.

Forget about collective leadership within the Party. And certainly forget about some kind of evolution toward democracy. Under Xi, China has returned to the one-man rule of the Mao period.

So, while Putin was busy securing his future this past weekend, Xi focused instead on securing China’s future as an integrated, politically homogeneous entity. In other words, Xi moved on Hong Kong.

Hong Kong once had great economic value for Beijing as a gateway to the global economy. Now that China has all the access to the global economy that it needs and then some, Hong Kong has only symbolic value, as a former colonial territory returned to the Chinese nation in 1997. To the extent that Hong Kong remains an enclave of free-thinkers who take potshots at the Communist Party, Beijing will step by step deprive it of democracy.

The protests that have roiled Hong Kong for the past many months, from Beijing’s point of view, violate the national security law in all four categories. So, violators may now face very long prison sentences indeed, and police have already arrested a number of people accused of violating the new law. The new law extends to virtually all aspects of society, including the schools, which now must “harmonize” their teaching with the party line in Beijing.

What’s happening in Hong Kong, however, is still a dilute version of the crackdown taking place on the Mainland. This week, the authorities in Beijing arrested Xu Zhangrun, a law professor and prominent critic of Xi Jinping. He joins other detainees, like real estate mogul Ren Zhiqiang, who was linked to an article calling Xi a “clown with no clothes on who was still determined to play emperor” and Xu Zhiyong, who called on Xi to resign for his handling of the coronavirus crisis.

Meanwhile, Beijing’s treatment of Muslims in Xinjiang province amounts to collective punishment: more than a million consigned to “reeducation camps,” children separated from their families, forced sterilization. Uyghur exiles have charged China with genocide and war crimes before the International Criminal Court.

Like Putin, Xi has aligned himself with a conservative nationalism that appeals to a large portion of the population. Unlike Putin, the Chinese leader doesn’t have to worry about approval ratings or periodic elections. He is also sitting on a far larger economy, much greater foreign currency reserves, and the means to construct an illiberal internationalism to replace the Washington consensus that has prevailed for several decades.

Moreover, there are no political alternatives on the horizon in China that could challenge Xi or his particular fusion of capitalism and nationalism.

Of course, that’s not going to happen under the human rights violation that currently occupies the White House.

Donald Trump aspires to become leader for life like his buddies Putin and Xi, as he has “joked” on numerous occasions. He has similarly attacked the mainstays of a democratic society — the free press, independent judges, inspectors general. He has embraced the same nationalist-conservative cultural policies.

And he has branded his opponents enemies of the people. In his Rushmore speech on July 3, Trump lashed out against…

“a new far-left fascism that demands absolute allegiance. If you do not speak its language, perform its rituals, recite its mantras, and follow its commandments, then you will be censored, banished, blacklisted, persecuted, and punished. It’s not going to happen to us. Make no mistake: this left-wing cultural revolution is designed to overthrow the American Revolution. In so doing, they would destroy the very civilization that rescued billions from poverty, disease, violence, and hunger, and that lifted humanity to new heights of achievement, discovery, and progress.”

He went on to describe his crackdown on protesters, his opposition to “liberal Democrats,” his efforts to root out opposition in schools, newsrooms and “even our corporate boardrooms.” Like Putin, he sang the praises of the American family and religious values. He described an American people that stood with him and the Rushmore Four and against all those who have exercised their constitutional rights of speech and assembly.

You’d never know from the president’s diatribe that protesters were trying to overthrow not the American Revolution but the remnants of the Confederacy.

Trump’s supporters have taken to heart the president’s attacks on America’s “enemies.”

Since the protests around George Floyd’s killing began in May, there have been at least 50 cases of cars ramming into demonstrators, a favorite tactic used by white supremacists. There have been over 400 reports of press freedom violations. T. Greg Doucette, a “Never Trump” conservative lawyer, has collected over 700 videos of police misconduct, usually violent, toward peaceful demonstrators.

As I’ve written, there is no left-wing “cultural revolution” sweeping the United States. It is Donald Trump who is hoping to unleash a cultural revolution carried out by a mob of violent backlashers who revere the Confederate flag, white supremacy, and the Mussolini-like president who looks out upon all the American carnage from his perch on the global Rushmore of autocrats.