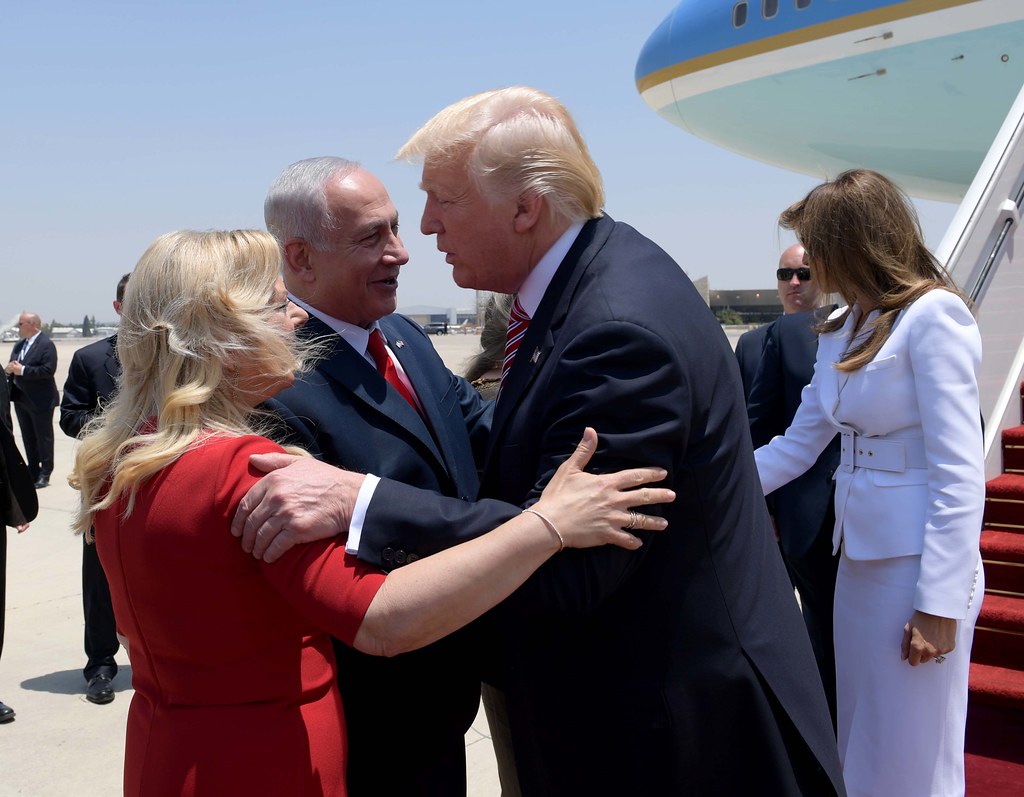 Trump’s Calls to “Send Them Back” are Mainstream in Israel

The affinity between Trump and Netanyahu is more than personal. It's rooted in a shared fantasy of a perfectly homogeneous society.
By Harry Blain | July 24, 2019

President Trump and his supporters have exploited the state of Israel for two shifty rhetorical maneuvers: accusing their opponents of racism, and concealing their own.

The rebuttal to Trump’s many flirtations with anti-Semitism and anti-Semites is his overflowing love for the Jewish State, while the Muslim women mildly supporting Palestinian rights in Congress are smeared as “Jew haters.”

Yet the president also inadvertently invoked his favorite American ally when he called for the “sending back” of these same women to places where, in most cases, they’ve never even lived.

The idea of banishment as a penalty for insufficient patriotism is now a common policy proposal in Israel, coming in both radical, far-right, and more PG-rated, centrist packages. Whichever one prevails, Americans are on course to subsidize it.

Like Trump’s outbursts, calls in Israel to “Send Them Back” lack logical consistency. After all, the country was founded on a process of “Send Them Away”: a mass expulsion of the Palestinian population that the United Nations General Assembly has since tried feebly to reverse.

However, at least since former Prime Minister Golda Meir’s claim that the Palestinian people do not exist, a more coherent narrative has emerged on the Israeli right: The Palestinians already have Jordan (where at least half the population is of Palestinian origin), so why should they have any of our land? As the American Jewish dissident Noam Chomsky once put it, “It’s as if someone were to argue the Jews don’t need a second homeland in Israel because they already have New York.”

Israeli political leaders, generals, and academics have endorsed various versions of the “Jordan Option,” ranging from an improbable overthrow of its Hashemite Royal Family to a confederation in which the Palestinians would be placed under Jordanian “adult supervision.”

These schemes do not bode well for Palestinians clinging to the last scraps of decent land in the West Bank. But they promise something much worse for the nearly 2 million Arab citizens of Israel, often referred to as “Israeli-Palestinians.”

Already labeled a “demographic threat” by Prime Minister Benjamin Netanyahu, this minority population, despite having elementary citizenship protections like the right to vote and stand for public office, is frequently framed by Israeli politicians of all stripes as either a nuisance or a menace — its existence alone constituting a threat to the country’s Jewish identity.

For the right-wing parties that have long held crucial posts in government, this dramatic problem requires a dramatic solution. A former defense minister and longtime maker-or-breaker of ruling coalitions, Avigdor Leiberman, has suggested beheading or deporting “disloyal” Palestinian members of the Knesset (Israel’s parliament) to Arab lands. He is particularly perturbed by Israeli-Palestinians “who raise a black flag on Nakba Day” instead of celebrating the founding of the Jewish State. “From my perspective, they can leave, and I’m very happily willing to donate them to Abu Mazen [Palestinian Authority President Mahmoud Abbas].”

When he first emerged as a national figure in the 1990s, Leiberman was widely seen as a marginal clown. Now, his vision of an Arab-free oasis is shared by possible future prime ministers like Ayelet Shaked, who believes that “Zionism needn’t continue, and won’t continue, to bow its head to a system of individual rights interpreted in a universal way” and by regular cabinet members like Naftali Bennett, whose “peace plan” involves the unilateral annexation of almost the entire West Bank and the hope that any remaining Palestinians will leave voluntarily.

Just as some white Americans have responded to their president’s racism with the dubious claim that “this isn’t our country,” liberal Israelis have bemoaned their governing class’s sharp lurch to the right. However, this can’t simply be pinned on the elites, as public opinion polls have shown that around 50 percent of Israeli Jews support an unspecified “expulsion” of Arabs — whether or not they are citizens.

Nonetheless, what remains of the Israeli center left does cling to an alternative vision. It goes something like this: Give the Arabs a truncated, dependent state as quickly as possible, so that Israel can retain a Jewish majority and still call itself a democracy. Historically the position of Labor Party titans like the late Shimon Peres, this is now the offering provided by Netanyahu’s “centrist” rivals, Tzipi Livni and Yair Lapid.

These leaders would not sully their “moderate” credentials with Trumpian “love us or leave us” language. But they want the same result: a stable ethno-state unencumbered by noisy minorities and embarrassing subject populations. They just want to reach it without getting their hands dirty.

The United States doesn’t appear to have reached this point yet, with much of the country clearly appalled by the president’s most recent racist tirades against elected representatives of color.

However, the affinity between Donald Trump and Benjamin Netanyahu is more than personal. It is deeply rooted in a shared fantasy of a perfectly homogeneous society — one where unthinking loyalty is the primary aim and value.

At the same time, Americans are uniquely well-placed to fight back. They still have some influence over their own government, but also — after decades of economic, political, and military support — considerable leverage over Israel. Unfortunately, many remain willing to accept the cartoonish image of a shining democracy amid the backward Arabian deserts. Others, largely as a result of media malpractice, remain disengaged.

Yet it is new, rare, and crucial to see members of Congress educating, agitating, and organizing to change this. We need many more of them.