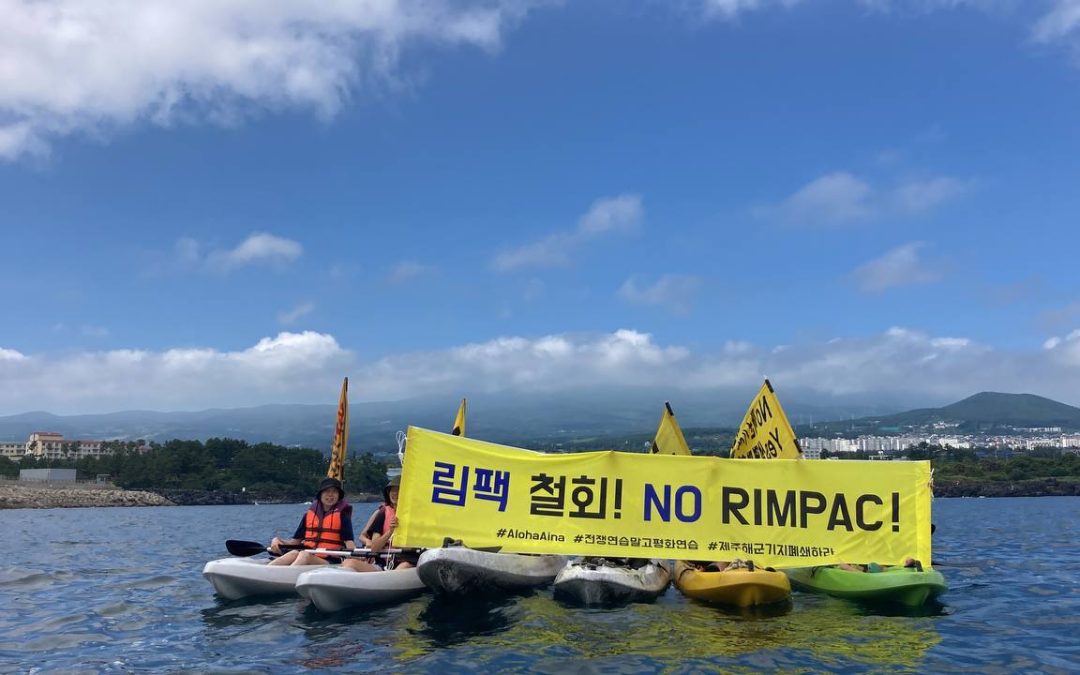 Wherever the South Korean military expands its capabilities, protesters are there to confront it.
By Choi Sung-hee | July 13, 2022

On June 22, 2022, 20 civic groups held a “No RIMPAC!” press conference in front of the Jeju Naval Base in Gangjeong Village, Jeju Island, South Korea. Beginning with the words “Aloha ʻĀina,” the press conference expressed solidarity with the people and all living beings in and off Hawai’i and southern California. It also demanded “peace practice, not war drills” and closure of the Jeju Naval Base.

In Hawaiian, “Aloha ʻĀina” means love and care of the land and sea. Many friends from Hawai’i have visited Gangjeong in solidarity for peace during the last few years. One of them was Pua’ena, who urgently appealed to people in Jeju not to let the warships in Jeju head for Hawai’i during the current RIMPAC (Rim of the Pacific) exercises, the biggest U.S.-led multinational maritime war drill, which is held every two years.

Unfortunately, we could not stop the warships. On May 31, three vessels—an amphibious assault ship, an Aegis destroyer, and another destroyer—left the Jeju Naval Base to join RIMPAC. They were eventually joined by an attack submarine that had headed for Hawai’i days earlier. On May 31, I could hear a noisy horn at my home, which is not far from the base, as Korea’s biggest and most threatening warship set sail. We ran to the base. Small emergency protests were held on the land and sea. We saw the warships leaving one by one. When Koohan Paik-Mander, an activist based in Hawai’i, told me that the amphibious assault ship had arrived at Pearl Harbor in Hawai’i around June 20, it made me sick.

At our June 22 press conference, we promoted a petition sponsored by the Pacific Peace Network (PPN) in opposition to RIMPAC. Friends from Hot Pink Dolphins brought along home-made hats in the form of diverse marine life that would be killed during RIMPAC such as coral, fish, octopus, turtles, and whales. Whales, which can absorb as much carbon dioxide as thousands of trees, would lose their hearing due to the sonar used in the war drills, eventually being stranded on the beaches and dying.

When RIMPAC began, the NATO summit meeting also started in Madrid. It is the first time that a South Korean president joined the NATO summit meeting. Yoon Suk-yeol, elected as the new South Korean president on May 9, has talked dangerously about the possibility of a ROK-U.S.-Japan military alliance, which even other conservative presidents had abstained from openly talking about because of the past imperial-colony relationship between Japan and Korea. Already a NATO partner country, South Korea will likely increase its involvement in the U.S.-led domination game against “enemy forces.” Under the previous president Moon Jae-in, South Korea became the first Asian country to join the NATO cyber defense group. South Korean participation in RIMPAC risks inflaming military tension against China in the Pacific.

The three warships that left Jeju Naval Base on May 31 did not head directly for Hawai’i. They joined an ROK-U.S. war game off Okinawa on June 2-4, which targeted North Korea. The warships are expected to also join the Pacific Dragon-22, a missile detection and tracking war drill, with Japan, the United States, Australia, and Canada (the latter three countries are part of the Five Eyes) off Hawa’ii at the beginning of August.

Most South Korean media outlets proudly reported that South Korea sent its largest-ever flotilla to the overseas drill. In fact, South Korea is the second largest military power behind the United States in this year’s RIMPAC. Reporters used the phrase “for the first time” multiple times to describe the amphibious assault ship’s participation in RIMPAC as well as South Korea’s command of an expeditionary strike group of 13 warships from eight nations and a thousand marines from nine nations. Also, in its participation in RIMPAC, South Korea sent a mobile construction squadron and nine amphibious assault vehicles.

The South Korean media has also reported on the deployment of around 1,000 military personnel including one company of the Marine Corps, an amphibious force, four teams of Naval Special Warfare Flotilla, one P-3 maritime surveillance aircraft, and two Lynx multirole naval helicopters. The South Korean military plans to operate a mobile fleet by 2026 and deploy a light aircraft carrier by the early 2030s, all to expand the scope of military operations. The Seventh mobile squadron of the Jeju Naval Base would be the core of the mobile fleet.

The expansion is not confined to the seas. On June 21, the South Korean-made rocket Nuri succeeded in launching a performance verification satellite, prompting the media to report that the military is preparing to put micro satellites into orbit. The South Korean military, including the navy, has long wanted to increase the space power of its units including the ability to operate sea-based satellite-interception systems.

The current South Korean government is strengthening trilateral coordination with the United States and Japan to put pressure on North Korea and contain China. But it would be in Seoul’s interest to reduce tensions in the region, not exacerbate them. China is the number one trading partner of South Korea, so it makes no sense for Seoul to participate in the anti-China efforts of the United States. Improving relations with North Korea—for instance by formalizing the end of the Korean War with a peace treaty—would also help to remove one of the key drivers of conflict in the region.

In this way, opposition to RIMPAC is not just opposition to a military exercise. It is part of the struggle against the preparations for war in Northeast Asia and the wholesale militarization of the ocean, earth, sky, and space.

Choi Sung-hee is a peace activist. She has joined the struggle against the Jeju Naval Base since 2010. She is a member of Gangjeong International Team, Gangjeong Peace Network, Inter-Island Solidarity for Peace of the Sea, and People Making Jeju a Demilitarized Peace Island. She is also a South Korean advisory board member for the Global Network Against Weapons and Nuclear Power in Space. This is part of a series produced between the Feminist Peace Initiative and Foreign Policy In Focus featuring critical voices on the militarization of the Asia-Pacific region. You can read the first essay in the series here as well as other articles on U.S.-NATO coordination, the U.S.-China arms race, the view from Guam, and the Hawaiian perspective.