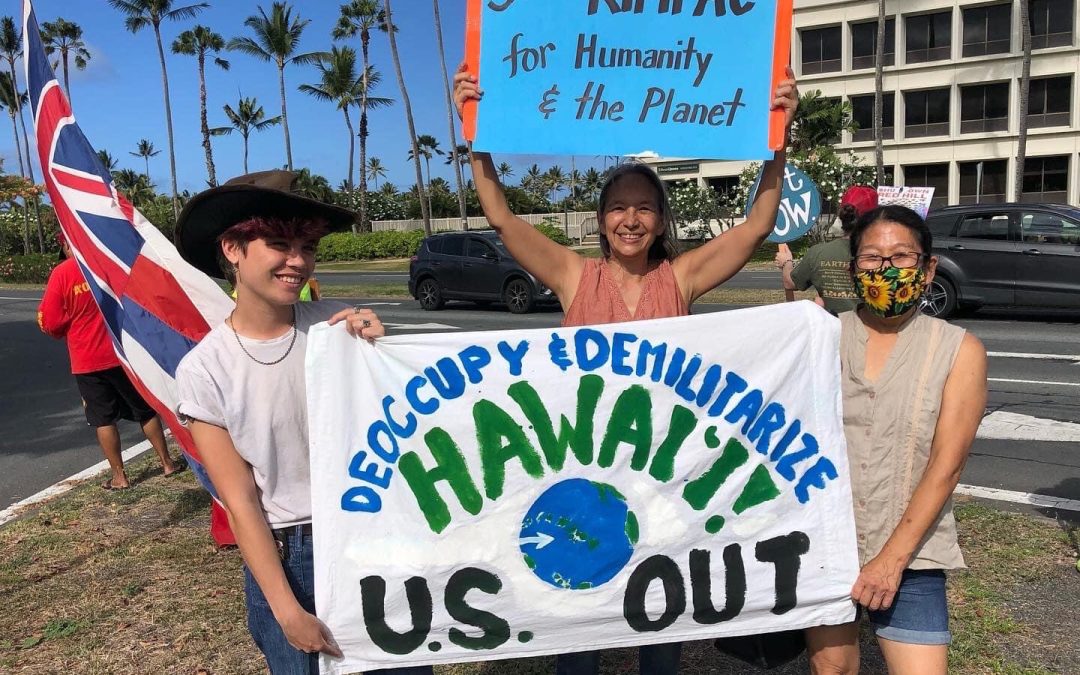 The Feminist Response to RIMPAC and the U.S. War Against China

From Hawai’i to Okinawa, women leaders across the Asia and the Pacific offer an alternative to great power competition.
By Christine Ahn | June 28, 2022

From June 29 to August 4, the United States will lead 26 nations in a massive, coordinated military exercise around Hawai’i and Southern California known as Rim of the Pacific, or RIMPAC. The world’s largest international maritime exercise, it will involve approximately 25,000 military personnel, 38 warships, four submarines, and over 170 aircraft from countries including Japan, India, Australia, South Korea, and the Philippines. This year’s RIMPAC—the largest ever—happens against a backdrop of a ballooning U.S. defense budget and calls for increased U.S. military presence in the “Indo-Pacific”—all for the purpose of containing China.

Yet often overlooked are the very real consequences of increased militarization in the Asia-Pacific, especially for frontline communities and marine ecosystems. During last year’s RIMPAC war games, for example, an Australian destroyer killed a mother fin whale and her calf in San Diego. “These military exercises can wreak havoc on whales, dolphins and other marine mammals through explosions, sonar, and ship strikes,” says Kristen Monsell of the Center Biological Diversity.

Aggressive language around U.S. power has also created a false binary paradigm of democracy versus authoritarianism (nations such as China, Russia, North Korea, and Iran) that increases tensions, militarization, and the possibility of new wars. This limited thinking obscures opportunities for cooperation on key issues that threaten our existence, such as climate change and pandemics, while diminishing the resources available for true measures of security like health, education, and housing.

That is why in the coming weeks the Feminist Peace Initiative—a collaboration between Grassroots Global Justice Alliance, MADRE, and Women Cross DMZ—in partnership with Foreign Policy in Focus will amplify the voices of feminist peacemakers and experts across the Pacific and Asia on the impact of this hyper-militarization on their communities, and to provide alternatives to great power competition between the United States and China.

We’ll hear from activists in Hawaii, where the U.S. Navy’s jet fuel storage has contaminated Oahu’s aquifers, and in Guahan (Guam), where U.S. military exercises have desecrated the ancestral lands of the Chamorro peoples. In Henoko, Okinawa, activists have been fighting the U.S. Marines to preserve coral reef and the endangered dugong, while on Jeju Island, South Korea, villagers have fought to stop the construction of a naval base where U.S. destroyer ships are docked to project power against China.

Collectively, these communities are calling for an alternative future that replaces militarized security with genuine human security.

In March, the Biden administration affirmed that China is the nation’s top security challenge, followed by Russia, North Korea, and Iran.

According to Biden’s Asia czar, Kurt Campbell, the U.S. goal for maintaining a presence in Asia has been “selling shirts, saving souls, and spreading liberal ideas.” This has largely been achieved by diplomats, missionaries, and businessmen, but always backed by the threat of military force.

The U.S. and Chinese economies are highly intertwined, which makes a potential war not in either country’s interest. But the threat of China’s rising power is also a boon for the U.S. military industrial complex. Although the pandemic and the U.S. withdrawal from Afghanistan after the failed, 20-year “War on Terror” provided a rare opportunity to push for change in U.S. foreign policy—leading to proposed cuts in the Pentagon budget and the repeal of the 2002 Authorization to Use Military Force—Russia’s invasion of Ukraine has bolstered the view in Washington that unless the United States acts, China will launch a similar invasion of Taiwan.

Across partisan lines, U.S. elite views on China are being shaped by Elbridge A. Colby, a former Trump official in the Defense Department. In his 2021 book, Strategy of Denial: American Defense in an Age of Great Power Conflict, Colby advocates for a “defensive perimeter” from Japan and South Korea through the Taiwan Strait to the Philippines. To Colby, achieving peace with China “requires firm and focused action, and acceptance of the distinct possibility of war with China,” including the possibility of giving nuclear weapons to states in the region. Colby says peace through strength is needed to prevent “reduced access to markets that will contribute to a decline in our prosperity and standard of living.” To counter China’s dominance over the region and ultimately the world, Colby argues, the United States must massively invest and modernize its already lethal military and strengthen its alliances in the Indo-Pacific.

The real threat China poses is to the bottom line of U.S. multinationals like the Carlyle Group, a private equity firm where Colby’s father, Jonathan Colby, is a senior advisor and managing director. According to historian Laurence Shoup, “Asia represents a very important market for Carlyle,” with $20 billion in assets in the region, many based in Taiwan. A 2016 study in Business History showed that Carlyle faced regulatory hurdles from China during a $440 million deal to acquire Xugong, China’s largest construction equipment manufacturer, while failing as well to acquire Advanced Semiconductor Engineering in Taiwan. As a result, Carlyle concluded that a more favorable national institutional framework was needed for buyouts to succeed. “Financial capitalist corporations like Carlyle want to be able to buy and sell companies without restrictions and do what they want to profit from each company’s resources and workers,” writes Shoup. But “China does not allow such unrestricted access, putting up roadblocks to the unfettered capitalism favored by neoliberal thinkers like Colby family members.”

As a result of the focus on military primacy, the United States is mobilizing NATO and European allies against Russia and China. For the first time in 14 years, the United Kingdom is set to store U.S. nuclear weapons; South Korea, under a newly elected conservative president, is calling for the return of U.S. nuclear assets to the peninsula; and, this spring, Japan’s Parliament finalized a $8.6 billion package to cover the cost of hosting U.S. troops until 2027, reflecting the deepening of a bilateral alliance.

However, this expanding militarization only increases the chances of a dangerous conflict with China in the Indo-Pacific. The 290 U.S. military bases encircling China and provocative U.S. military exercises like RIMPAC “increase threats to Chinese security and encourages the Chinese government to respond by boosting its own military spending and activity,” says anthropologist David Vine of American University.

The Feminist Counter to the Great Power Competition

To prevent more devastating wars, the Feminist Peace Initiative seeks to transform U.S. foreign policy away from a military-first approach towards one that prioritizes genuine human security. This requires democratizing the process of shaping foreign policy by centering the voices of those most impacted by U.S. wars and militarism.

Feminism offers a powerful framework for reimagining U.S foreign policy. Consider the many gendered assumptions in the shaping of our foreign policy—for example, how traditional masculine traits like domination, competition, and aggression so often trump feminine ones like shared prosperity, mutual reliance, and cooperation. Imagine instead if policies based on the collective well-being of all people and the planet took precedence.

Addressing the most urgent threats to our existence—climate change, pandemics, and poverty—requires slashing the Pentagon budget, which currently comprises more than half of all federal discretionary spending each year, which could instead go towards Head Start, Pell grants for low-income college students, food assistance for Women, Infants and Children (WIC), and any number of other programs that advance collective well-being. This is especially urgent as the “US Department of Defense is the world’s single largest institutional consumer of oil—and, as a result, one of the world’s top greenhouse gas emitters,” according to the Cost of War Project.

Black, brown, and Indigenous communities in the United States and abroad most often face the brunt of violence of US militarism. The U.S. military heavily recruits in poor communities of color with the promise of signing bonuses, educational opportunities, and world travel, while making invisible the collateral damage on veterans’ lives, such as mental illness, substance abuse, homelessness, PTSD, and high rates of suicide, not to mention the trauma families endure when soldiers return home from war. These communities witness firsthand how U.S. military bases are sites where the violence of U.S. militarism manifests before a war, whether through the destruction of coral reefs, forests, farmland, and sacred sites or through sexual exploitation and violence around U.S. military bases.

We are all casualties and accessories of empire, which is why we must link across oceans and national boundaries to end this rampant militarization. As the Biden administration pursues aggressive policies to confront China’s rise, it is ever more urgent to challenge outdated definitions of security that imperil our collective futures.

Christine Ahn is the executive director of Women Cross DMZ and coordinator of the Korea Peace Now! campaign.This is part of a series produced between the Feminist Peace Initiative and Foreign Policy In Focus featuring critical voices on the militarization of the Asia-Pacific region. You can read other articles on U.S. NATO coordination, South Korea’s expanded military footprint,,the U.S.-China arms race, the view from Guam, and the Hawaiian perspective.