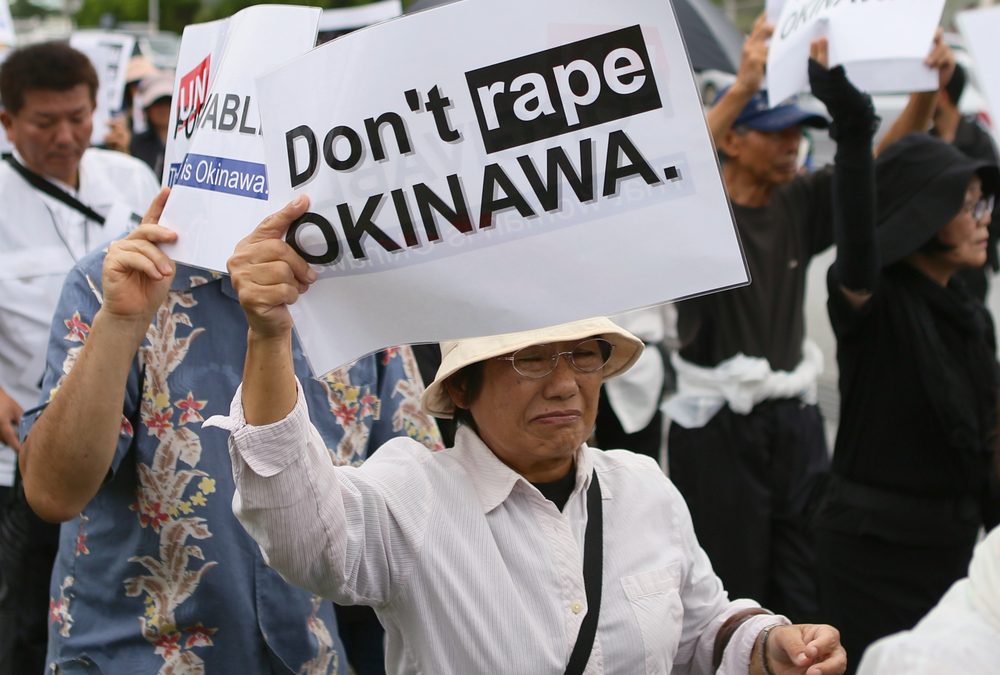 2,000 rally in silent protest in 2016 with banners and placards in front of U.S. Marine Camp to mourn the death of a woman who was raped and killed by a former U.S. marine (Shutterstock)

The Impacts of RIMPAC on Okinawa and Japan

In its Article 9, the Japanese constitution promulgated in 1946 under the U.S. post-war occupation renounces war as a means of resolving international disputes and proscribes maintaining land, sea and air forces. This article is widely supported by the Japanese people. To those in the countries and areas in Asia that Japan invaded and colonized during the Asia-Pacific War, Article 9 is a pledge by the Japanese people not to repeat colonial and military violence.

Yet, in the early period of the Cold War, the U.S. occupation changed its course from disarming Japan to turning it into a bulwark against the communist bloc. Around the time of the Korean War, Japan started to re-arm itself, first with the National Police Reserve, which soon became the Japan Self Defense Forces (JSDF). Despite the persistent argument by peace activists that the JSDF is a breach of Article 9, the Japanese government has won public support for the JSDF through decades of promoting the forces as the disaster rescue organization and an insistence on an “exclusively defense-oriented-policy.” The JSDF have now grown to be one of the world’s largest militaries.

In addition to this fundamental contradiction concerning the possession of an armed force, the Japanese constitution encounters a profound problem because Article 9 was never implemented on Okinawa, the southernmost archipelago of the country that was directly occupied by the U.S. military from 1945 to 1972. Even after Okinawa’s reversion to the Japanese administration, the U.S. military continued to be stationed in Okinawa, which consists of only 0.6% of the entire land mass of Japan yet hosts about 70% of the U.S. military facilities in Japan. These Okinawan facilities have catered to the various needs of the U.S. military in waging wars in Asia and beyond. Meanwhile, for more than seven decades, the U.S. military has violated the basic human rights, safety, and security of the people of Okinawa with virtual impunity. The U.S.-Japan military alliance has caused tremendous negative impacts on the people of the host community, including contamination of the soil and water by toxic materials, unbearable noise caused by military training, and sexual violence committed by the troops and other personnel, to name a few.

The upgraded RIMPAC 2022, with the largest-ever number of participating countries, reinforces the military ties between the United States and Japan. To this year’s RIMPAC 2022, Japan Maritime Self Defense Force is sending its largest vessel, JS Izumo (DDH-18), and other vessels and aircrafts including JS Takanami (DD 110), JS Kirisame (DD 104), P-1 maritime patrol air craft and others as well as about 1,000 troops. Although Izumo is categorized as a helicopter destroyer, it underwent modification in recent years to become effectively an aircraft carrier with increased interoperability with the U.S. military and where fighter jets such as F-35B of the U.S. Marine Corps can land and launch.

The JSDF units participating in RIMPAC 2022 are part of their annual Indo-Pacific deployment, which lasts for several months and involves other joint exercises and calls to various ports in the Indian Ocean and the Pacific. Under the strategy of “Open and Free Indo-Pacific,” a central framework of Japan’s defense policies laid out in the most recent Defense White Paper, this is part of the intensification of the military alliance against China led by the United States in the Indo-Pacific region.

This ideology of deterrence, involving the competitive exhibit of coercive power, is a deeply masculine and militarized idea. This patriarchal ideology and the structure of the security policies undermine the security and well-being of people, particularly those who are made vulnerable and deprived of their autonomy, as feminist peace activists/scholars have pointed out.

These JSDF activities have already gone beyond the “exclusively self-defense-oriented policy,” yet public discussion on the issue is hardly found in Japan. It is partly because there is very little media coverage, and also because the negative impacts of reinforced militarization disproportionately affect only a small portion of the entire Japanese population, most notably the people of Okinawa, which constitutes a racist aspect of the military security of Japan and the United States.

The Japanese government is also moving forward with its plan to construct a new, massive U.S. military facility in Henoko, which the people of Okinawa have long opposed and which even a conservative U.S. think tank believes won’t be completed in a decade. Last year, it was revealed that the JSDF and the U.S. military made a secret agreement in 2015 to station the JSDF’s amphibious unit at the Henoko facility. This planned “replacement” of the U.S. Marine Corps Futenma Air Station has proven to be equipped with more functions than an air station to become a staging area for the display of U.S.-Japan deterrent power in the region around Taiwan against China.

The JSDF has been slowly and carefully increasing and consolidating its presence in Okinawa, which has required overcoming a deep-seated antagonism that goes back to the Japanese Imperial Army’s strategy during the last stage of the Asia-Pacific war to protect the Emperor in Tokyo by prolonging the ground battle in Okinawa. Now, the JDSF, as evident in the secret deal with the U.S. military, is gaining more of a foothold in and around Okinawa, particularly on the small remote islands of Miyakojima and Yonaguni, as it replaces the U.S. deterrent capabilities near the Taiwan Strait. Once again, Okinawa is being made the forefront of the military strategies of Japan and the United States.

The U.S. military stationed in Okinawa continues to be a source of insecurity for the people of Okinawa.  PFOS and PFAS, toxic materials with possible carcinogenicity used for fire extinguishers by the U.S military, was found outside the military bases and even in the drinking water. Troops have been arrested for drunk driving and crimes against the local population. Service member have committed sexual assaults. U.S. military aircraft drop their parts and other materials in civilian residential areas. Stray munitions have damaged civilian homes.

These are not accidents. Rather, they represent a structural problem of militarism, which prioritizes the military activities and values, and of a patriarchal and racialized defense alliance, which fans the flames of military competition. RIMPAC 2022 is exacerbating further the hostile environment in the region, imposing more burden on the people of Okinawa. Article 9 has become an even hollower provision of the constitution. RIMPAC is a giant step in the wrong direction for peace in the region.

Kozue Akibayashi work with the Women’s International League for Peace and Freedom in Kyoto. Suzuyo Takazato works with Okinawa Women Act Against Military Violence. This is part of a series produced between the Feminist Peace Initiative and Foreign Policy In Focus featuring critical voices on the militarization of the Asia-Pacific region. You can read the first essay in the series here as well as other articles on U.S.-NATO coordination, South Korea’s expanded military footprint, the U.S.-China arms race, the militarization of Hawai’i, and the view from Guam.